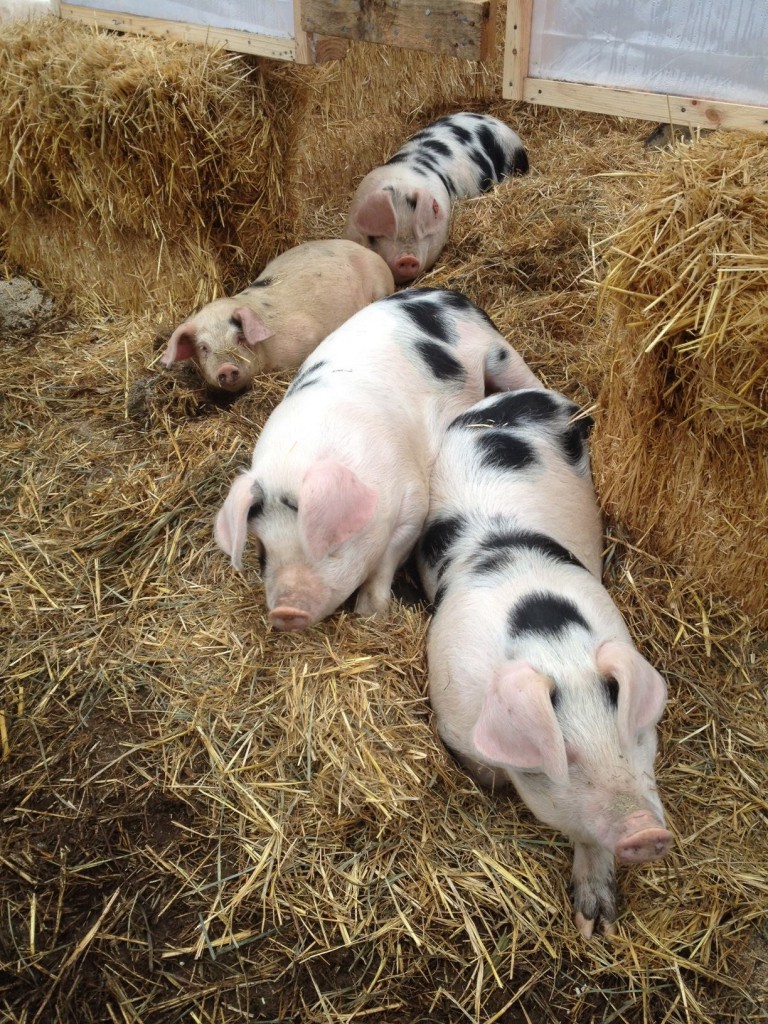 Our next pigs will be Gloucestershire Old Spots Pigs (GOS) these pigs are awesome animals. This heritage and rare breed, as a general rule, has a very sane, calm temperament – much like the Large Black Heritage.

Our new pigs (three weaners/barrows) will be coming from White Buffalo Ranch in Aumsville Oregon. This couple has been farming in Western Oregon’s Willamette Valley since 1979. They have always raised pigs but when they received their first registered GOS gilts from T-Meadow Farm a few years ago they quickly fell in love with the breed and established White Buffalo Ranch. Currently, they have over 112 GOS pigs of varying sizes and genders as well as a few LBHA sows and crosses. When they started raising GOS it was impossible to obtain GOS in the Pacific Northwest and all of their original breeding stock had to be flown in.

Numerous terms are used to describe pigs of various ages, sexes and ultimate purpose, such as sow, boar, piglet, sucker, weaner, baconer, porker, chopper and stag. When a young pig is up for sale, or being shown, however, it usually is referred to as a barrow or a gilt. These terms define not only the sex of the pig, but also its ultimate potential purpose.

A gilt is a young female pig. In common use, gilt is used to refer to a pig that has not yet been bred, whether only a few months old or approaching a year. Technically, however, the term gilt is defined as a female pig that is less than six months old. A gilt is intact, or capable of breeding and producing young, and her reproductive organs are not surgically or chemically altered.

A barrow is a male pig that has been castrated or rendered incapable of reproducing before he reaches sexual maturity. Castration usually takes place while the pig is very young, at about two or three weeks of age. If a male pig is allowed to become sexually mature and then is castrated, he is called a stag. A barrow is less aggressive than a boar, or intact male pig, and can be kept with other barrows and gilts. He also easier is for humans to handle, and his meat retains a pleasing flavor and aroma, unlike boars, who produce a foul odor that permeates the meat even after butchering.

Gilts are kept primarily for reproduction. They are fed, handled and selected with the idea that they will produce the next generation of pigs. Although they can become sexually mature sooner, a gilt usually is bred for the first time between six and nine months old. After breeding or having a litter, she is called a sow. Gilts not selected for breeding usually are used for meat. Barrows are kept primarily for meat production. They gain weight quickly and can be slaughtered as young as four to six months old for pork, or as late as 8 to 10 months old for bacon.

Whether a gilt or barrow is a better choice depends on the animal’s purpose. For meat, such as pork, when the pig is slaughtered at a young age, it makes little difference which to use, although barrows tend to gain weight quickly. If you think you may want to breed and raise your own pigs, however, keep in mind that a barrow can never reproduce, while a gilt can be bred. Gilts and barrows are both suitable as pets; however, a gilt in heat may try to break out and get to a nearby boar, while barrows don’t tend to have such compulsions.

Pages On Our Site